This year continues the expansion of our 1:1 Chromebook initiative.  Indian Hill School will receive 405 Chromebooks, with 324 Chromebooks in 12 classroom carts coming from the generosity of the HFEE.  This 1:1 availability could potentially greatly reduce the number of days spent on PARCC testing next April.

The Village School PSA will be adding 50 touchscreen Chromebooks in two first grade mobile lab carts.  The W.R. Satz School and Holmdel High School will add 180 and 150 Chromebooks in six and five carts respectively.  Each student in grades 2-6 will have access to a Chromebook in their classroom.  Grades 7-12 have Chromebooks carts in every English classroom, in addition to a large number sign-out carts and PC labs.

InfoSnap online student registration and annual student record updates enters it's second year of service after a successful roll-out this year.  InfoSnap is integrated with PowerSchool.

This August will bring a major update to our PowerSchool SMS (Student Management System) with the  release of PowerSchool Server 10.  This update will finally allow teachers to maintain their PowerTeacher grade book on variety of devices such as Chromebooks.

The district is reviewing new website technologies that will optimize viewing on smaller mobile devices and is also considering a district mobile app for smartphones by summer's end in 2017.

Our technology coaches will continue to develop ways to enhance our classroom instruction with technology enhanced lessons as new capabilities or improved access comes online.
Posted by Anthony Gattini at 5:23 AM 1 comment:

This year brought a significant infusion of technology equipment and more importantly, the addition of a second technology coach.  Erin Damji took over as technology coach in grades K-6, while Caren MacConnell shifted her focus to grades 7-12.

With 827 student Chromebooks added district-wide this summer, we have cut our student to computer ratio in half.  All four schools now have ratios from 1:1 to 1.32:1.  That is a dramatic improvement from where we were in 2013, when our ratios were as low as 3.6:1 and as high as 6:1.

The wireless networks at Village, W.R. Satz and Holmdel High School each received upgrades.  Indian Hill did not require any such upgrades, since classrooms were already outfitted with a wireless access point in each classroom.

The district also replaced 300 computers that were six years old as part of our retirement/replacement plan.  Most of those replacements (180) were at Village School.

Holmdel High School's TV production studio made the jump to native HD recording and editing with (3) new cameras and 27" iMac workstations.  A new HD video switcher and control surface along with a new 16 terabyte shared storage/workflow system round-out the list of modernization upgrades.

A special "Thank You!" must be extended for the generosity and technology donations provided by the HFEE, PLG and PSA.  Donations made to Village School now provide a 1:1 student to Chromebook ratio in second and third grades.  Two Samsung Galaxy 10.1 carts bolsters Village School's lower grades with a total of 50 tablets.  The donation of eighty-one Chromebooks by the HFEE and PLG drops Indian Hill's student to computer ratio to 1.19:1.
Posted by Anthony Gattini at 11:48 AM 1 comment:

This year brings the addition of 150-180 new Chromebooks to each school.  Not only do these additions greatly improve our student to computer ratio, but more importantly they allow our teachers to create a more student-centered 21st century classroom environment where they can develop students higher order thinking skills, communication skills and collaboration skills utilizing technology they will find in the 21st century workplace. In order to ensure our students, faculty and technology perform to their potential, we made several other improvements.  We offered professional development on a number of Google apps throughout the Fall with more planned for the remainder of the school year.  We doubled the bandwidth to the Internet at each school, elevating each school's broadband speed to 150 Mb/s.  We installed a new application aware 802.11ac wireless network and began upgrading the supporting wired infrastructure.  We added two part-time technology coaches at our Jr./Sr. high complex to assist our staff with technology integration and further develop their skills.  They will continue to build upon the skills already learned from our outstanding K-6 Google Certified Teacher, Caren MacConnell, who attended the exclusive Google Teacher Academy at Google headquarters in Mountain View, California this summer.

The Chromebooks will serve double duty as they will also help provide a sufficient number of testing devices for this Spring's PARCC assessments.
Posted by Anthony Gattini at 7:39 PM No comments:

What's New and What's Next?

Welcome Back!  It was a busy summer while we removed and recycled over 330 obsolete computers, transferred another 153 and added 420 new desktop PCs.

After surveying both students and staff, we have responded to their requests for additional access to technology.  On September 16th we opened our new 31-station high school computer lab in the T-stem portion of the downstairs library.

In July we moved our e-mail system to the cloud and kicked our Google Apps campaign into high-gear by internally developing solutions and  announcing an extensive array of professional development resources with a combination of on-demand online video training and live instructor-led workshops.

With standardized testing transitioning from pencils and bubble sheets to Internet connected computers outfitted with headphones and boom-microphones, you will see more emphasis and investment in technology moving forward.
Posted by Anthony Gattini at 10:51 AM No comments:

It has been a year since my last posting and I can report that the items my department planned to implement have been, or will be, implemented according to plan.

One of the more visible indications of technology and public relations progress has to be the introduction of a totally revamped district website. Borrowing design elements from some of the most heavily visited technology websites on the Internet, we achieved our goal of a less cluttered appearance, and that translates into making the information you are looking for easier to find.

Since 2007, our vision has been to improve access to technology, integrate technology across the curriculum, and to assist teachers and engage students with classroom projection and sound field systems.

This year will deliver mobility and high speed 802.11n wireless Internet access to Holmdel faculty and students at all three campuses. Anyone with a Holmdel network account will be able to bring in their personally owned devices and gain filtered access to Internet. W.R. Satz and the High School are currently up and running and Indian Hill and Village will be completed later this summer in time for the 2012-2013 school year.

In partnership with my department, the administration and the staff will evaluate future touch interface aware operating systems and applications and the use of tablet devices in order to lower technology costs, and to improve access, as well as outcomes.

The creation of a catalog of internally developed technology related courses for our staff was developed over the last year and the offerings continue to grow. These courses are delivered throughout the year with advanced workshops occurring before and after school or during the summer.

For the students, we a have added a part-time technology coach, who is shared between Village and Indian Hill Schools and we also added three weeks of PC-related technology curriculum and assessment in 7th and 8th grades as part of a cycle course. We are also using Study Island as a formative assessment tool in grades 3-8 as a replacement for Learnia.

Something I will be focused on, and you will be hearing more about, is the Partnership for the Assessment of Readiness for College and Careers (PARCC), which is the next-generation of assessment in Math and Language Arts/Literacy. It is scheduled to take effect during the 2014-2015 school year. One unique aspect to this assessment is that at least part of it will be conducted online. This could greatly impact technology planning and funding requirements.
Posted by Anthony Gattini at 5:50 AM 5 comments:

Here is an advanced peek at the presentation outline.

The tentative purchasing breakdown contingent upon budget approval for 2011/2012 is as follows:

This summer we will create two new computer labs. The first lab will be a new 27 station graphic arts lab at the high school loaded with the latest Adobe Creative Design Suite software,

The second computer lab is a new 30 station lab at William R. Satz School constructed to satisfy an increasing number computer access requests and the needs of a new technology education curriculum.

Many new online resources have been made available over the last several years including subscriptions to BrainPop, First in Math, Study Island and Discovery Education's United Streaming. Some teachers have leveraged the power of web-based applications to take their classes virtually paperless and have their student collaborate electronically in real-time.

Learnia is an online resource and a formative assessment tool that was implemented several years ago as part of a 50-district pilot program and is used in grades 3-8. Learnia results can provide early guidance to teachers and administration on areas that deserve added attention and holds the potential for improved NJ ASK results.
Posted by Anthony Gattini at 12:03 PM No comments:

Not quite as catchy as "Lions, Tigers and Bears, Oh My!" but these are the sort of priority items and words that are most uttered in the form of technology requests here at Holmdel. At this point, a good portion of Village, Indian Hill and Satz Schools have Wi-Fi coverage and classroom sound field systems. The goal is to have complete coverage in the next 3-5 years, or as funding allows. While there is a great amount of momentum building for ceiling mounted LCD projectors, there is much fundraising and work to be done before the majority of the classrooms can have this sort of student-engaging presentation capability.
Thanks to our own maintenance department adding this installation burden to their already busy schedules, we expect to be able to afford and deploy over twenty-five LCD projectors or 37" LCD TVs before we break for summer recess.
I am really encouraged that teachers and administrators are asking for Tablet PCs and LCD projectors and I hear great things are happening with podcasting technology in the World Languages Department. Well, I guess this blog posting will serve as my holiday season technology wish list.
Posted by Anthony Gattini at 2:22 PM 3 comments: 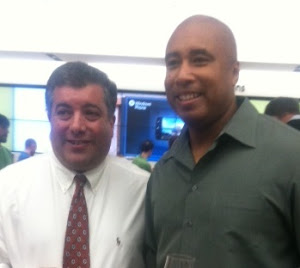 Me and "The Dude" 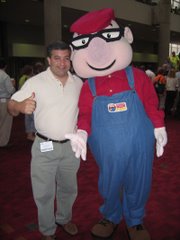 At NECC in Atlanta